Is it too late for Teemu Suninen’s new mind? The one he’s talking about installing between here and Rally Finland? Let’s walk through this one together.

I’m not going to trivialize this story by telling you what a lovely bloke the 27-year-old is. And he is.

The World Rally Championship doesn’t deal in the obsequious. It deals in stage times and results.

Talking of stage times, the M-Sport Ford World Rally Team driver has had the opportunity to start 69 stages in a Fiesta WRC this year. How many times have we seen him finish one of the tests in the top three times overall?

Once. A third place on the mile-long Thursday night Tartu superspecial at Rally Estonia.

There’s no doubting this guy still has the talent. Look at that opening stage in Monte Carlo. Yes, he crashed on the final corner, but his split times were quite extraordinary for much of the previous 12 miles. You don’t pedal a modern day World Rally Car through some of the most treacherous conditions at that speed without talent.

Yet here we are.

I honestly felt a podium was possible in Estonia. Anything less, with a clean run, I couldn’t see a way forward for Teemu. I’m really struggling now.

A top-six is a worthy result. But plus seven minutes to Kalle Rovanperä? On a fast rally, where the leading positions are regularly split by tenths of seconds rather than whole ones?

By Sunday afternoon, Suninen was lost. He was a broken man. We’ve seen Finns broken at M-Sport before. Remember Jari-Matti Latvala in Poland in 2009? That was about as broken as a Finn could be. Latvala’s response? Finland followed Mikołajki and Latvala delivered a podium on his home round a month later.

Are there mitigating factors for Suninen?

There’s no doubt M-Sport’s emphasis has shifted towards Adrien Fourmaux in recent months. It’s the Frenchman who – of the current drivers – has been doing much of the Puma Rally1 testing, which means he’s benefitted from seat time where Suninen’s sat at home. The team’s indecision as to what to do with Teemu next season is, by extension, impacting on his pace right now. Psychologically as well as physically.

None of the M-Sport drivers have fulfilled their quota of pre-event tests, put plainly, there isn’t the money to do that. Right now, the British squad’s focus is, quite rightly, on 2022 and beyond. The remainder of this season is to be survived. If that means the team dictating which tires can be taken and when, then so be it.

Gus Greensmith is in the seat on the back of a commercial deal. Let’s cut to the chase, he’s a customer. Does that mean he’s getting preferential treatment? Quite possibly. That’s common as well as commercial sense. Suninen’s program is also funded, don’t forget he’s from the Timo Jouhki stable. But there’s an inevitable hierarchy.

Where does Fourmaux sit in there? Already, the same rumours are circulating that Red Bull’s pumping the same millions into his seat that it did for Sébastien Ogier in 2017 and 2018. That’s simply not true.

But Fourmaux is seen as the future and for that reason Malcolm Wilson wants him to be gathering as much experience as possible. And it’s MW’s name above the door.

Is there sympathy for Suninen? Yes and no. Yes because he’s in that horrible spiral where he needs a result to raise his confidence, but he doesn’t really have the confidence to push for that result.

Yes, you can point to the testing and the apparent shortcomings from M-Sport in servicing a frontline driver this season, but Suninen’s had his chance. Chances.

Fans can pick holes in the Ford Fiesta WRC right now, but it’s still a capable enough car. Safari might have been a specific event, but it was still quick enough for Fourmaux to go fastest, right? 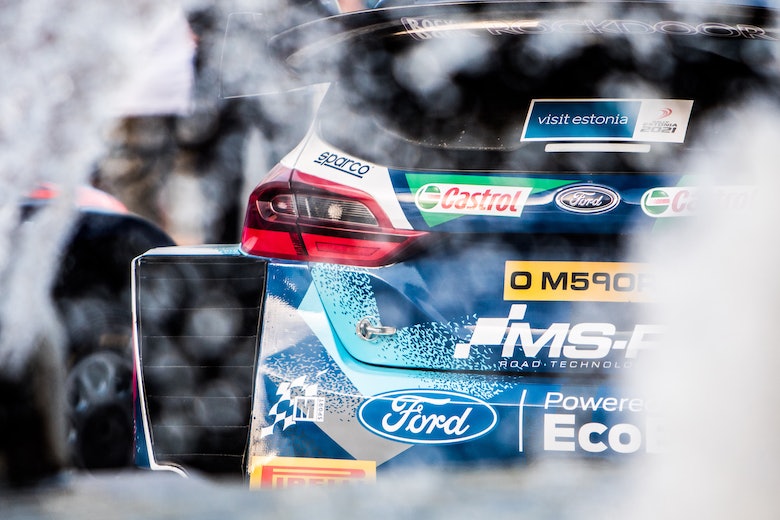 We’re all very well aware of the financially driven shortcomings of the British squad right now. We all know there hasn’t been enough testing done. But talking about such things – in the way Suninen has done regularly – is a) not very smart and b) an exceptionally short-term view.

On the final day in Estonia, Teemu told DirtFish: “For one and a half years, we have tested once on a proper level. So, at some point, you start to see if you are not practicing enough.”

He might be right. But he did get a day and a half before Estonia. And, yes, there were some technical issues early in the rally, but not to the tune of seven minutes. Nowhere near.

As for testing, take a look at the Puma Rally1. That’s where the future lies.

M-Sport has already invested heavily in Fourmaux and now, dealing in futures, it’s the Frenchman I’d be putting in the factory Fiesta WRC from here until the end of the season. Suninen’s had five years with M-Sport. He’s shown superb speed and promise, but by his own admission, he needs to recharge the batteries and start with a new mind.

In 2016, Elfyn Evans started with a new mind in a Fiesta R5. He won the British title and was rarely off the WRC2 podium and regularly on the top step.

The Welshman would now probably argue that was a retrograde step, but relieving some of the building pressure from his shoulders helped him to win again.

Much as he won’t want to hear this, a Rally2 car and some breathing space has to be the best way forward for Suninen.

Motorsport history is littered with tales of drivers finding a way to succeed. Suninen has the talent, the speed and the bravery. Now he needs to forget what’s gone on, not dwell on what Fourmaux and Greensmith might or might not be getting, clear his mind and focus to his own future. It’s a genuine clean sheet of paper moment.

Take a Ford Fiesta Rally2 to Jyväskylä and show what will be an strong field the way home.