Thierry Neuville has won the Ypres Rally, the very first Belgian event to be held in the World Rally Championship, with Craig Breen completing a Hyundai Motorsport one-two in second place.

The victory, secured by 30.7 seconds, was Neuville’s first since the Monte Carlo Rally in 2020 and his new-for-2021 co-driver Martijn Wydaeghe’s first ever in the world championship.

All three Toyota drivers fought hard for the final podium place, but it was Kalle Rovanperä who prospered to take his first WRC rostrum on asphalt. Elfyn Evans and Sébastien Ogier, who punctured on Sunday morning, finished fourth and fifth.

But despite finishing ahead of Ogier in the classification, Evans actually lost ground to Ogier in the championship as Ogier was second on the powerstage and Evans only fifth.

Neuville, who pitched his Hyundai into a pitch of spectacular donuts upon winning the rally, made the biggest gains with the rally win and three points from the powerstage, drawing level with Evans in the championship; 38 points behind Ogier.

Hyundai also banked a handy haul of points in the manufacturers’ race, bringing Toyota’s run of five consecutive rally victories to an end.

“We had a lot of pressure coming here but I felt quite comfortable all the weekend,” said the jubilant winner.

“I could rely on my team, the car as well the car was working well. It’s a pleasure to give Martijn this first victory, especially here in Belgium.”

Neuville and Breen began the Ypres Rally as strong favorites for success as veterans of the unique rally. As the only two drivers of the 10 to start in World Rally Cars to have prior experience of the stages, they soon began to streak away from the rest of the field.

But it was their Hyundai team-mate Ott Tänak who was quickest out of the blocks, leading the rally after SS1 before fading across Friday as he took time to understand the stage characteristics, and was then slowed by an engine issue on the second loop.

That dropped Tänak into the clutches of the Toyotas who were running in 4-5-6 formation, but the 2019 World Rally Champion never got a chance to fight as a puncture – and then a faulty jack that broke when he was changing the offending tire – dumped him down to sixth; a position he would eventually finish.

Tänak did at least win the powerstage for the third rally in succession, but his championship deficit to leader Ogier stands at 75 with only 120 points left to claim across the season.

Out front though, Breen was busy applying the pressure onto home hero Neuville. He led after SS2 and SS3 but was overhauled on the next one, and although he would remain glued to the back of Neuville’s i20 Coupe WRC the Belgian Hyundai wouldn’t be toppled thereafter.

Breen backed off substantially on Sunday with the likelihood of team orders enforcing him not to race Neuville too hard, but second on Ypres marked the first time Breen has ever scored back-to-back podiums in the WRC as the result followed second place on last month’s Rally Estonia.

“All the ingredients are around us and honestly it’s such a pleasure,” Breen said.

“I always bang on about what an honor it is to drive a car like this but it’s something so special, we should all feel privileged to do it.”

While the Toyota drivers couldn’t match the leading Hyundais, they were all evenly matched with each other. Elfyn Evans spent the majority of the event as the lead Yaris WRC but struggled to keep up with Estonia winner Rovanperä when the rally moved 160 miles south-east to the Spa region.

Rovanperä made his move on the second Sunday stage and continued to extend the gap, also earning his first back-to-back podium in the WRC.

“I’m really proud we can be best of the guys that haven’t been here before,” he said. “I think that’s pretty good.”

Evans ended up 6.5s behind his team-mate but 6.2s ahead of Ogier, who recorded his lowest finishing position since Arctic Rally Finland back in February.

It was a messy powerstage run from Evans who admitted he was “pretty disappointed” as he “couldn’t deliver the times” on the final day.

Ogier’s weekend wasn’t overly straightforward either as he struggled running as first car on the road on Friday more than he expected – the stage covered in dust from recce and regional farm traffic – and wasn’t totally happy with his Toyota’s set-up on Friday, but he will still be WRC leader come Rally Finland in October.

Things therefore could’ve been much worse for the seven-time champion, and they were for the WRC’s less experienced crews.

M-Sport starlet Adrien Fourmaux was the first high-profile casualty of Ypres’ stages. Heading into the event in strong form and determined to push a bit harder, it all came to a sudden – and scary – end on the third stage when his Ford Fiesta WRC stepped out of line on a fast left-hander.

With roadside ditches leaving very little margin for error, Fourmaux got the tail out as he slid in the dust and careered into the inside bank, pitching his car into an airborne spin before it finally came to a rest in the ditch, hitting a telegraph pole for good measure.

The damage proved too great for him to play any further part in the weekend.

Team-mate Gus Greensmith’s demise was far less dramatic, but no less galling. Just a few hundred meters from the start of SS4, he ran his Fiesta wide due to an optimistic pacenote and was quickly swallowed by a ditch.

He was going nowhere but did return on Saturday – where he battled some intercom problems – and Sunday to at least record a finish and secure some manufacturer points for M-Sport.

Toyota junior Takamoto Katsuta’s 2021 season meanwhile has hit its first sticky patch as he too dramatically crashed out of the Ypres Rally.

Running just behind Fourmaux but ahead of Greensmith before the two M-Sport cars bowed out of the running, Katsuta – competing with a new co-driver in Keaton Williams as Dan Barritt continues to recover from an injury – found himself in no man’s land on Saturday with a sizeable cushion over Pierre-Louis Loubet behind.

In a high-speed section, Katsuta felt some “kickback” through his steering over a bump and was unable to turn into a fast left-hander, which spelled disaster. His Toyota Yaris WRC ran wide to the right, the rear-right wheel dropping into the ditch and kicking the car into the air and a roll.

The accident took out an electricity line and brought the stage to a lengthy stop, but thankfully Katsuta and Williams walked away unharmed.

Loubet didn’t complete all of the stage mileage either, dropping his Hyundai into a ditch in a similar fashion to Greensmith on Saturday, and having to restart under Rally 2 rules on Sunday.

To compound matters, the 2C Competition driver picked up a front-right puncture on the powerstage and elected to stop and change it despite the short 6.97-mile length of the test.

All of this carnage elevated the top Rally2 cars into the final four positions of the overall top 10. As he has so often this season, Yohan Rossel prospered in WRC3 and with that secured seventh overall – equalling his finish from his last WRC appearance on Rally Italy.

Rossel was engaged in a tight fight with Sébastien Bedoret – a protégé of 11-time Ypres winner Freddy Loix – and trailed heading into Sunday’s leg, but transmission trouble for Bedoret on Sunday that restricted him to just front-wheel-drive dropped him out of WRC3 podium contention and the overall top 10.

Instead, Pieter Cracco claimed second in class – and the win in the Belgian Rally Championship – ahead of 10th placed overall Vincent Verschueren. Fabian Kreim finished ninth but was unregistered for WRC3.

The highest placed WRC2 runner was all the way down in 18th after a true rally of attrition.

M-Sport’s Teemu Suninen led the way through most of Friday but made a mistake and ran into a field, picking up a puncture and overheating his Fiesta’s engine.

Jari Huttunen, driving the all-new Hyundai i20 N Rally2, should’ve been the chief beneficiary but he also punctured, meaning his team-mate Oliver Solberg jumped from third to first.

Solberg held that position through Saturday but did so with difficulty, as he battled just to keep his i20 on the road due to failed power-steering. Cruelly, his herculean effort went unrewarded as his car wouldn’t start out of parc ferme on Sunday morning.

With Nikolay Gryazin – who absolutely crawled through the powerstage with a mysterious problem he “was asked to be silent about” – and Tom Kristensson both out of the running due to mistakes, Solberg’s non-start on the final day paved Huttunen’s path clear to give the new Hyundai car WRC2 victory on its debut.

But even that wasn’t straightforward, as Huttunen’s power-steering also gave up on the final day.

“Small leak in there,” Huttunen confirmed. “[It was] not easy rally and it’s not gone how we wanted, but I am happy the car is here. Sad for Oliver but luckily we are here.”

Jon Armstrong dominated the Junior WRC category to close to just a handful of points behind Sami Pajari in the championship, finishing 1m00.6s clear of Pajari on the rally.

Robert Virves took his first JWRC podium in third, but it was a rally of what might have been for William Creighton. He won seven stages but lost over 2m30s with an oil pressure warning on SS3 that restricted him to only fifth at the finish. 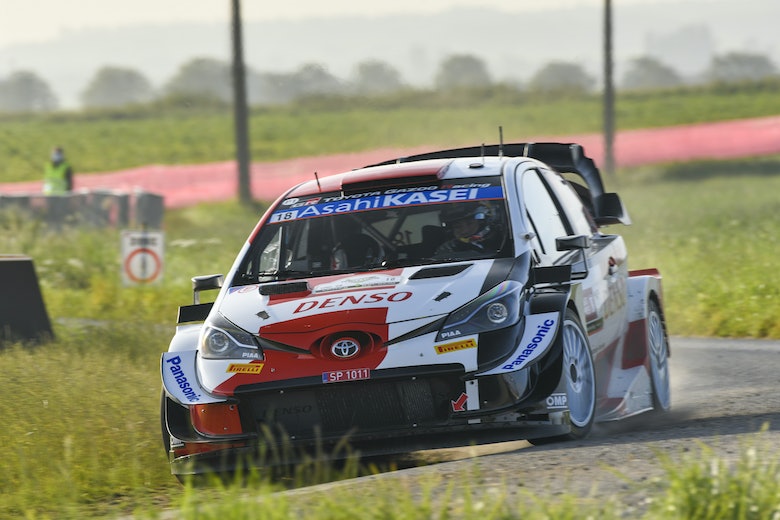 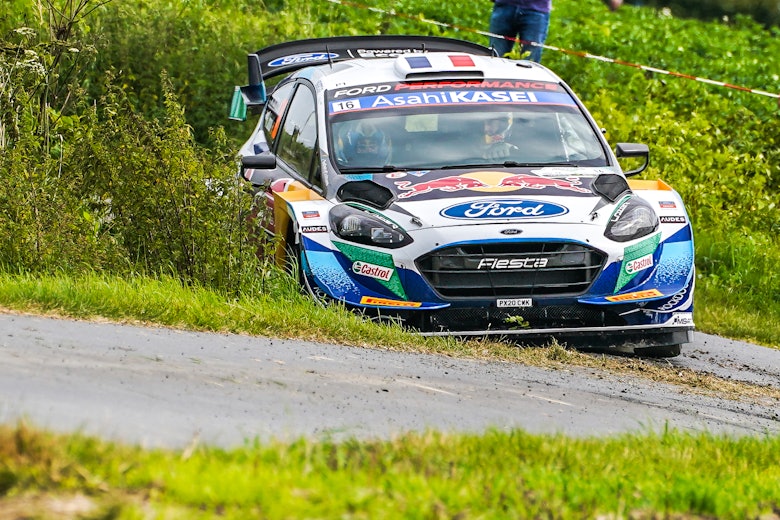 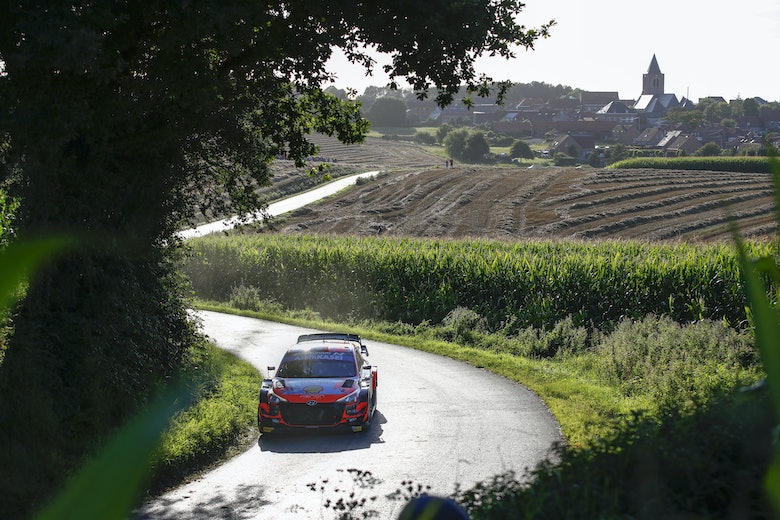 How Breen has made sense of “tricky” Ypres characteristics

Tänak wins SS19 as Neuville closes in on Ypres victory