Ott Tänak has lost the lead of Rally Estonia a stage after claiming it, as a front-right puncture promoted Kalle Rovanperä to the front and dumped Tänak down to seventh.

Hyundai driver Tänak has suffered a wretched run of misfortune lately, losing the lead on Rally Portugal and Rally Italy due to suspension problems with his i20 Coupe WRC.

Rally Estonia was seen as a redemption rally for the 2019 world champion though given that he won the rally last year and it’s also his home event.

Tänak was leading after the first forest stage on Friday by 0.3s over team-mate Craig Breen, but the puncture, collected just before the halfway mark of the Otepää test, has sent his event into a downward spiral.

The delamination cost Tänak 26.6s to the stage winner to leave him trailing Rovanperä by 25.3s overall.

Gus Greensmith had held a strong, early fifth position but mechanical gremlins have halted his run as his Fiesta WRC came to a stop with what was believed to be a water pump problem.

Greensmith did however have an impact at the head of the field as he managed to get his M-Sport Ford going again and subsequently created a dust storm for Breen.

“Don’t worry we’ll get that time back,” said co-driver Paul Nagle between spitting the pacenotes out. Breen had been ahead of Rovanperä on the splits but ended up 10.2s slower to trail by 9.2s.

“I hope that they look after me because the stage was really nice,” said Breen, in reference to the likelihood that he could receive a notional time from the event organizer.

“Even afterwards at the end of the stage it upsets your rhythm so much, I just hope they look after me.”

Breen does however remain in second spot, 2.4s ahead of team-mate Thierry Neuville who is now up to third.

Neuville felt his “pacenotes were a little bit slow on the last section so I couldn’t really commit” but was happy with his test, while Rovanperä was also happier after what he felt was a mistake-ridden performance on the previous test. 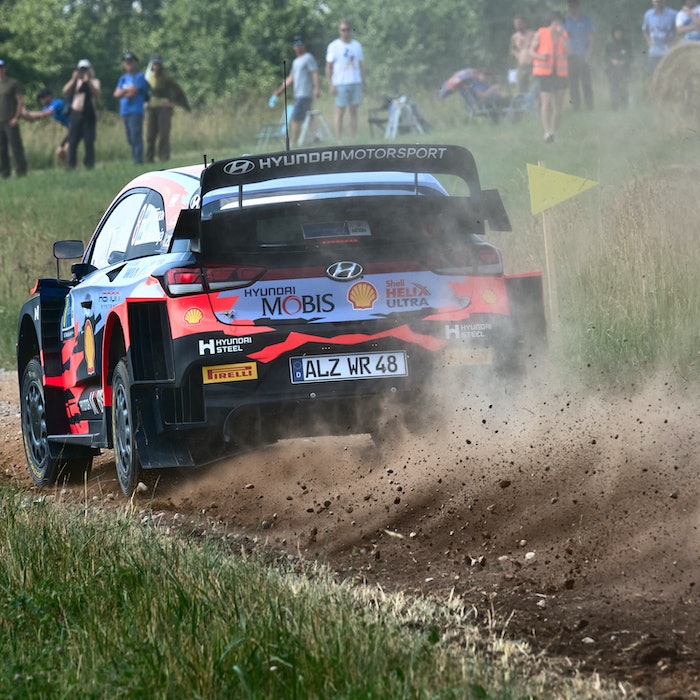 “It’s not risky but I just needed to take the small mistakes out and the time is better,” the new leader said. “For sure it’s nice but it’s also crazy to be so flatout all the time.”

Despite sweeping the road clear for his rivals, the dramatic SS3 has promoted Sébastien Ogier into an incredible fourth place; aided by mishaps for this team-mate Elfyn Evans but also going second fastest.

Evans haemorrhaged time as he got slightly confused through a technical series of junctions, overshooting a square-left. A stall, and then a ragged exit on another square-left corner compounded a frustrating stage where he dropped a rather unhandy 13.6s to title rival Ogier.

Pierre-Louis Loubet is another 11.4s behind in ninth spot, saying: “We know what our target is and we try to do it.”

That target is likely to be for the 2C Competition driver to make the end of the rally as he’s yet to finish a round of the 2021 WRC season without retiring.

Mads Østberg completes the overall top 10 at the head of both the WRC2 class and the Rally2 runners. Andreas Mikkelsen is his closest WRC2 rival, 6.4s behind.