He’s running away with it, isn’t he? Kalle Rovanperä could only manage fifth place on Rally Italy and yet, somehow, managed to grow his points lead in the World Rally Championship even further.

That, surely, has to be a soul-crushing reality for the chasing pack. Faced with the worst road-sweeping of the season to date, Rovanperä barely scraped into the top five. Yet it still wasn’t enough for anyone to close the gap.

While Thierry Neuville and Elfyn Evans failed to capitalize on the championship leader’s failure to stand on the podium for the second time this year, there is one reason to be optimistic that drivers’ championship fight isn’t over.

Italy revealed one crumb of comfort: the Rovanperä–Toyota combination has a weak point. A weak point that can be exploited at the next round, Safari Rally Kenya, and Acropolis later in the year.

On slow, rough, technical gravel stages, Rovanperä is far from unassailable. Quite the opposite; he struggled quite badly.

“For sure there were some stages where we lost too much time compared to what the feeling was in the car,” Rovanperä told DirtFish.

There are few nightmare scenarios worse for a rally driver than thinking you’re fast, finding out you’re not, and not understanding why.

It’s an opportunity for the others to pounce on. Albeit, quite a narrow one. 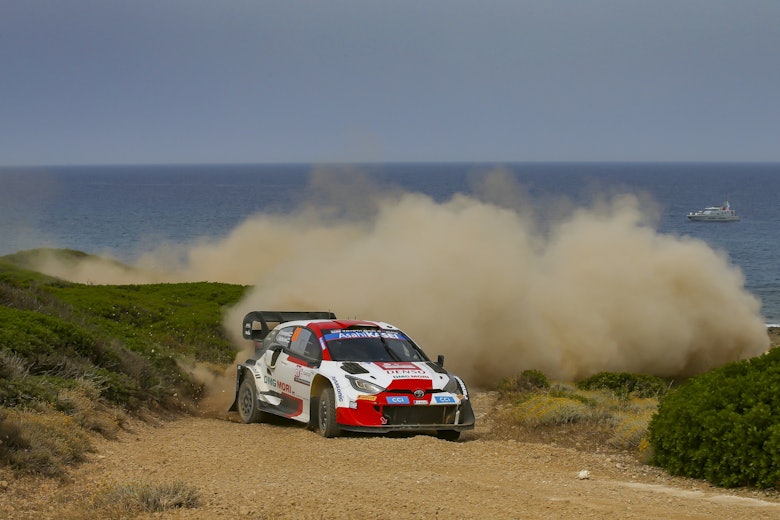 WHY TOYOTA THINKS FIFTH WAS THE BEST ROVANPERÄ COULD DO

“Straight away when we got some stages with grip, we did quite OK stage times, so then it was a bit more enjoyable,” added Rovanperä.

“That’s going to be really important now, for the car to find out for gravel rallies where can get more grip, especially low grip. Right away when we see a stage with high grip our cars are all quite fast.”

That will come as little surprise given where the GR Yaris was born and developed. Every Toyota developed out of Jyväskylä – and Puuppola, nine miles to the north, before that – has been close to unbeatable on fast gravel.

Only twice was a Yaris bested on a fast and flowing gravel event during the final phase of the World Rally Car era – Estonia in 2020 and Poland in 2017, both times by Hyundai.

So the window of opportunity is narrow. Estonia and Finland are less likely – but by no means impossible – opportunities for the others to hunt the championship leader down. But it’s there. Toyota’s technical director Tom Fowler conceded as much.

“In some stages we had good performances but in other stages where there was clearly far too much time loss,” said Fowler. “I can’t remember the stage number yesterday…the first one of the loops each time, we lost much too much time in that stage.”

“Had we been fighting for the victory when we were doing that stage twice, my feeling is that we would have lost time there and made it difficult for ourselves to perform for the rest of the rally.

“So, in that sense, that’s for sure one area that we have to work on.”

It’s not just that the Yaris seems to have a weak point. Rovanperä also reminded everyone on the Friday of Rally Italy that he’s not suddenly immune to human error.

On Friday morning Rovanperä was gifted a reprieve – the first pass was so dust-filled in the tree-lined sections that his rivals behind in the road order could hardly see where they were going.

There was no such benefit in the afternoon. He felt the full force of road sweeping duty. And facing the inevitable time loss, he overcompensated ever so slightly on Osilo – Tergu, sliding wide and ripping the rear wing off his Toyota.

To his surprise, it was a small mistake with big consequences.

“Overall the second loop was not so good. We didn’t really choose the right tire either,” he admitted. “We could have used the hards in the first one of the second pass.

“I also made a mistake going wide in one corner. We were a bit lucky not to hit anything with the car. Of course we lost the rear wing in some bushes or something, I don’t know. But yeah, after that it was difficult to drive.”

His job was already hard enough with the road sweeping to contend with. Ripping his rear wing off had made it much worse.

“I expected that on the fast corners you’d just have a bit more free [movement on the] rear,” he said, suggesting he expected it to mirror the typical behavior of the aero-heavy previous-generation WRC cars in a similar situation.

“But it was basically the whole car lifting up a lot on medium-speed corners. So yeah, it was a big struggle to make it through. In fourth-fifth gear, no grip at all basically. I had to be quite careful.”

It was easy to forget that after three wins on the bounce – including an improbable win from first on the road in Portugal – that the Rovanperä–Toyota duo isn’t necessarily a dominant one just yet.

In Kenya, there’s a clear opportunity for the others to exploit a chink in the championship leader’s armor. The question is: will they take it?