It’s entirely appropriate that on a rally dubbed ‘Rally of the Gods’ the winner – Kalle Rovanperä – produced a divine performance to net his second ever World Rally Championship victory.

The Acropolis Rally had been missing from rallying’s global tour for far too long, but that was addressed last weekend. Rovanperä was just 12 when the rally last featured in the WRC, but he defied his level of experience to take a dominant win.

Rovanperä’s excellence is the big story in town but there are plenty more subplots to dissect in the weeks between Greece and Finland in early October.

Here’s what we learned from the 2021 Acropolis Rally, starting with the man of the moment.

Rovanperä could be the one to beat in 2022

Next year marks 20 long and painful years since Finnish rally fans last had a World Rally Champion to celebrate. At the time, nobody thought Marcus Grönholm’s title trophy cabinet would go untouched thereafter, and nor was the steamrolling domination of two Sébastiens foreseen.

But Kalle Rovanperä is the driver destined to change all of that for Finland. And based on current form, he could be in contention as early as next year.

Rovanperä was firmly in the spotlight at the start of the season when he took the championship lead after Arctic Rally Finland, but the bubble quickly burst with a first-stage accident in Croatia.

A barren run of results followed, but victory on Rally Estonia in July truly reignited his season. Rovanperä was third in Ypres – a result that shocked many given he’s known more for his loose-surface prowess – which was a really strong performance, somewhat overlooked by the hyperbole surrounding Thierry Neuville’s home win. 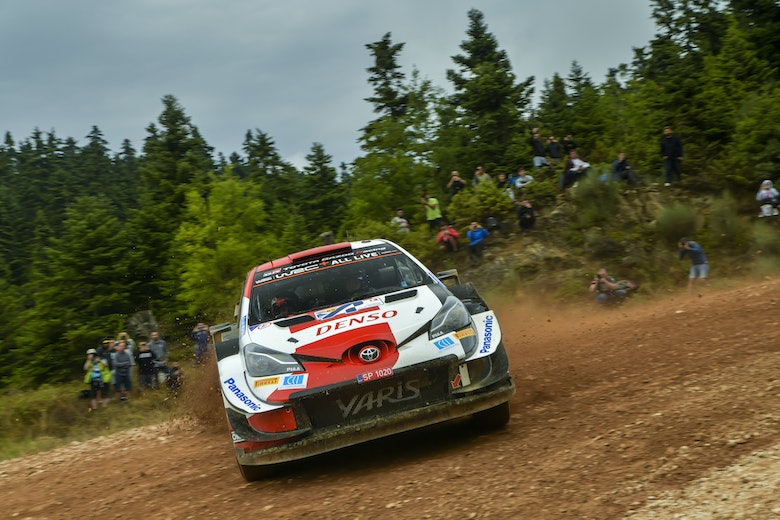 Acropolis was just an extension of Rovanperä’s brilliance. He led by a mere smattering of seconds after the first day, but not once did you get the sense Rovanperä was about to get eaten alive. And that’s despite leading the two most recent World Rally Champions.

The stage times he was able to produce should be, quite frankly, frightening for his rivals, but what’s more scary is how relaxed Rovanperä appeared to be while doing it. With Sébastien Ogier calling time on his full-time WRC career after Monza this year, Rovanperä is putting forward a real case to be the talisman of the world championship from 2022 and beyond.

Paradoxically for Toyota, just as Takamoto Katsuta’s form has taken a dip, Rovanperä’s has soared. Don’t expect the party to end any time soon as, with his home event up next on his 21st birthday weekend, a Rovanperä in this form will be difficult to beat.

The 2021 points intrigue is now for second

It’s appeared quite obvious for some time now that Sébastien Ogier will win the 2021 WRC title. Nothing is ever guaranteed in motorsport – especially rallying – but the seven-time champion is just too good in these kinds of situations. He doesn’t put a foot wrong, and the same can’t be said for his rivals.

In fairness to Elfyn Evans and Thierry Neuville, neither driver was responsible for their difficult Acropolis results, but it doesn’t change the fact that Ogier now heads to Finland needing to outscore his closest challengers by 16 points to secure an eighth world title in nine years.

Ogier topped up his points haul nicely in Greece. Scoring his first podium since June, he knew that as soon as Evans was hit with gearbox trouble and Neuville’s power-steering played up he could just drive his own rally and let Kalle Rovanperä and Ott Tänak dispute the rally win.

He even cheekily told DirtFish halfway through Saturday that Rovanperä had been impressive, but his pace was the “rall win speed but not necessarily championship win speed” that Ogier was producing.

Regardless of whether Ogier takes the title in Finland, it would require a major capitulation for this one not to go his way. The fight that’s heating up is the one for second, not that any of the drivers are particularly bothered about that.

Rovanperä is the big mover in this regard, claiming a maximum 30 points from Greece to close to just one point behind Neuville and seven behind Toyota stablemate Evans. There’ll be added heat in this fight, too, with Toyota and Hyundai battling for the manufacturers’ crown.

This might be a fight of more interest to media and fans than the drivers involved in the tussle themselves, but with Ogier now 44 points clear, focusing on three drivers covered by just seven points is becoming more appealing.

The Acropolis wasn’t Hyundai’s finest hour. Not one of the team’s three drivers appeared satisfied with the result or the performance – although at least some quarters of social media will be quietened by the fact no i20 Coupe WRC suffered a suspension failure.

Picking that out as a bit of a highlight shows what a disappointing weekend this was though. From the get-go, Ott Tänak was the team’s highest-placed runner but consistently he commented that he was struggling to feel the affinity he should with his car, and repeatedly referenced how important that was up against the might of Toyota.

In the end, what he called a “clever” tire choice allowed him to shade Sébastien Ogier and beat him to second, but Hyundai lost yet more ground in the championship to Toyota, which it now trails by 57 points. And you won’t need us to remind you that Toyota has won seven of the nine rallies so far in 2021.

Electrical glitches appeared to also be a problem; Thierry Neuville remarking to DirtFish that “there’s some random issues that are coming back” and Tänak feeling “really, really lucky” to even make the finish with a bout of problems on the final day.

It’s a bit of a head-scratching time. Mercifully, the remaining three rounds should suit Hyundai better as it’s been the slower, more technical gravel events where it has seemed to struggle for form this term.

Sadly though another silver lining from Greece was dampened. Oliver Solberg’s pace in the i20 N Rally2 was blistering, but he failed to see the finish with a suspension problem and then a driving error.

Gus Greensmith’s desire to try and claim his maiden WRC stage win and potentially earn a rostrum finish on the Acropolis Rally divided opinion on our pre-event SPIN, The Rally Pod podcast.

Some felt it was justified, others felt it was overly ambitious – chiefly because Greece has never really been the destination to be taking crazy risks. Unfortunately, Greensmith and M-Sport just weren’t quick enough on the Acropolis.

That’s been a bit of a theme this season, as M-Sport’s weaker budget compared to its two rivals is well documented and it’s clear a lot of focus will be on ensuring the new Puma Rally1 is a winner straight out of the box in January 2022, but even so on rougher gravel rallies M-Sport has tended to fare better.

Looking back at the rougher rallies this year we've tended to go well so I think my expectations were founded. I'm a bit surprised, we're definitely not where I was hoping we would be Gus Greensmith

Greensmith wasn’t quite on his A-game, admitting to DirtFish on Friday that he wasn’t “driving my best” but he didn’t feel his ambition was misplaced.

“Looking back at the rallies this year in the rougher conditions we’ve tended to go well so I think it was a founded expectation,” he said. “I’m a bit surprised we’re definitely not where I was hoping we would be, but we need to look at that.”

Sadly, little would improve over the course of the weekend and Greensmith was then in cruise-home mode on Sunday when team-mate Adrien Fourmaux, who he’d been battling for fifth place, lost three minutes with an engine issue.

As we’ve said before in these columns, 2022 can’t come soon enough for M-Sport, but don’t be surprised to see Greensmith as a prominent part of that attack.

Bulacia is better than we realized

To be honest, that subheading could be bit of an injustice to Marco Bulacia. Nobody has ever suspected that the 20-year-old wasn’t up for this level, but did we know he could take it to the very best in WRC2 on merit?

Truthfully, we didn’t. But we do now. Yes, he was eventually beaten by Toksport Škoda team-mate Andreas Mikkelsen, but for large portions of the weekend Bulacia was leading and forcing Mikkelsen to raise his pace when he didn’t really want to.

Bulacia has flown under the radar in WRC2 this year, largely because of the A-list names such as Mikkelsen, Mads Østberg, Esapekka Lappi, Oliver Solberg, Adrien Fourmaux and Teemu Suninen.

But his campaign has been quite superb. Never one to throw it all on the line as he prefers to build up his experience, Bulacia had two second places and two fourths in his collection before the Acropolis.

Yet another second in Greece has moved him into second in the championship, and has certainly left an impression on his rivals and the watching team bosses.

“He’s been doing a really, really good job, absolutely,” praised Mikkelsen on Saturday, speaking when lying 0.8s behind Bulacia ahead of the final leg.

“I know he can be fast, for sure. We’ve seen it in tests, we’ve seen it in rallies before but it’s not about pure speed this rally, you have to be clever, but for sure he’s been doing both of that so very good.”

The profile of the Acropolis has changed

Car-breaker. Rough. Demanding. Tough. Rocky. These are all words or phrases that have typically described the Acropolis Rally. But in 2021, only really one of them – demanding – rang true.

It’s fair to say the nature of this year’s Acropolis was somewhat different to what we’ve seen in years gone by. This will no doubt upset and enrage certain corners of the internet, but it’s nothing to necessarily belittle. It’s just a symptom of the organizer’s great work in repairing and regrading the roads, which were simply in much better condition than they’ve ever been before.

Of course, it could be argued an Acropolis without the car-breaking rocks would be like Sweden without the snowbanks – and 2020 certainly showed us that that doesn’t work. And it must be said, aside from being awestruck by Rovanperä’s stage times, as a contest this one didn’t ever really get going.

But that didn’t make the Acropolis a bad rally. The unique format – with more single-pass stages than we’ve seen all season – was refreshing and the unseasonal weather created a very tricky challenge for the drivers to manage.

However with that being said, if the 2022 Acropolis is more of a Portugal than a Safari, it might be worth considering reintroducing Turkey to the calendar. We still haven’t forgotten those bruising runs through Çetibeli last year.