There are many, many cool things about Finland. And even more cool things about Rally Finland. But one of the coolest has to be leaving the hotel before five in the morning and the sun being high in the sky already. Welcome to the northern summer sun.

It’s the same at the other end of the day. It never goes truly, madly, deeply dark. More navy blue than black. And if you’re there at traditional pre-event test time in June, you can easily drive at midnight without the need for headlights. It’s not a good idea. But it’s perfectly possible.

Not since Sunday September 14, 1952 has the event then known as the Jyväskylän Suurajot run as late in the season as this year’s now World Rally Championship-qualifying Rally Finland will.

Starting on September 30, the Finnish forests will reverberate to the world’s fastest rally cars in October for the first time. So, what will an autumn 1000 Lakes look like?

Colourful, in a word. Yes, there’s plenty of evergreen in the woods, but even the pines and spruces can change coats and the silver birch certainly will.

And cold. The coldest temperature recorded in Jyväskylä in October was -18.8C (that’s -1.8F and when it can get that chilly, snow’s always a possibility. Or at least a solid frost. And, don’t forget, there will be no more of those half-four sunrises, if the cloud’s down and rain’s hanging it can be almost eight before there’s light worth talking about.

But, having given you the dark side of the record low, it’s only fair to mention it has been as toasty as 20 degrees in October (68.2F). The reality? Somewhere in between, obviously.

One thing it’s not going to be is scorching. Forget 2010, when Rally Finland roasted drivers in 30-plus degrees, day-in-day-out.

From an engine engineering perspective, the lower ambient temperatures should mean faster World Rally Cars, but in Finland it doesn’t really make that much difference. Such is the advanced nature of the aerodynamics of a World Rally Car, flying through the air at 100mph tends to force gallons of the stuff (can you have a gallon of air?) into every crevice and corner on the car. 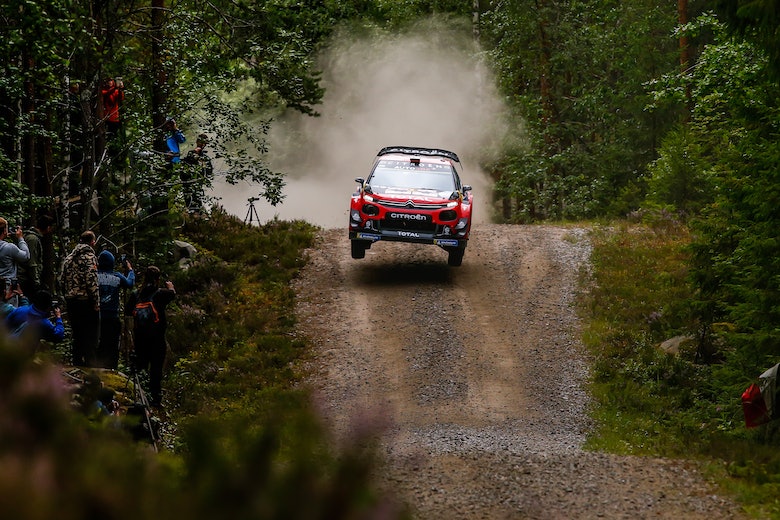 Yes, forced induction is more effective in cooler climes, but power outputs won’t be impacted in any noticeable way by July becoming October. The biggest weather impact is if it rains. And how much it rains.

If it’s lashing it down in the weeks leading into the event, the roads will be softer and more susceptible to damage. Damaged roads mean rutted roads and rutted roads aren’t conducive to stage records.

But a touch of the fine drizzly stuff can very much work in favour of the drivers besting stage records. Finland, remember, is both fast and loose when it comes to its summer gravel. The cleaning effect isn’t usually as bad in Jyväskylä as it can be in, say Sardinia or Greece, because there’s simply not the number of junctions or tight corners requiring the cars to break traction under braking and acceleration.

A drop of autumn rainwater would bind the top surface together quite nicely, providing a more stable base with more grip and support for the tire.

Regardless of the weather, month or season, you can be sure of certain things in central Finland. The welcome will be warm and the reward for getting out there and standing among the autumn colours will be huge.

The commitment to make a time through Urria or Moksi is massive whenever we go racing, but down rain-soaked roads where even Pirelli’s softest Scorpion is struggling to sink its teeth into Finland? It will be immense.

If we’re honest, we all wanted the gravel grand prix to be in its usual summer spot. But leaving it there wasn’t an option. The Finnish government’s ruling on limiting mass gatherings means it wouldn’t be possible to bring fans and not bringing fans means the season’s fastest rally simply wouldn’t stack up.

An autumn Rally Finland is by far a preferable option.

And anyway, as February’s Arctic Rally Finland demonstrated, AKK – the nation’s governing body, run by two of the sport’s most knowledgeable and sensible chaps in Jarmo Mahonen and Kai Tarkiainen – is more than capable of running a rally out of season.

M-Sport’s mission for Suninen in Croatia