There’s no way to sugar coat this: Acropolis Rally Greece was an unmitigated disaster for Toyota. Anything that could go wrong, did go wrong.

While Hyundai ran rampant with a 1-2-3 and M-Sport was cruelly robbed of two cars in the lead fight, Toyota never looked like fighting at the sharp end. Not only did two GR Yaris Rally1s simply break down; the ones that survived were, to be blunt, slow.

This, of course, raises the question of why. Toyota was an unstoppable force earlier this year. But it looked woefully ill-prepared in Greece. How could it be so far away from the top spot?

It’s not one reason. It was a perfect storm of multiple factors.

For some in the Toyota stable, road position was worse than for others. Kalle Rovanperä was doomed from the moment he set off – sweeping the road on an opening day with four single-pass stages and only one test, Loutraki, having a second pass. There was no worse event to open the road.

Elfyn Evans was in a somewhat similar position as the fourth car on the road. But ultimately, so too were Hyundai duo Thierry Neuville and Ott Tänak – and Tänak, even with no hybrid boost for most of the first full day, was faster despite starting before Evans.

Only Esapekka Lappi, starting way down the running order as the team’s part-timer, got near the podium places on Friday.

“Oh, it’s road position,” said Lappi, when asked what he’d put his superiority over his team-mates down to.

Road order was a cop-out for every driver but Rovanperä, though. Something was distinctly amiss.

Indeed, Rovanperä provided a clue. Sardinia had been a messy event – he’d struggled with road order there too and, oddly, he made exactly the same mistake on Friday afternoon in Italy as he did on Saturday morning in Greece. He slid wide and hit the rear of his GR Yaris against a tree.

That time it was just a missing rear wing to manage. This time, he’d taken the whole rear trunk lid off and broken the rear-left wheel, leading to several minutes worth of time loss. But the underlying characteristics of the performance were the same: on the loosest, roughest of gravel, with plenty of slow and technical corners, the championship leader suddenly wasn’t all that.

Team boss Jari-Matti Latvala put some of that down to mentality. A driver frustrated at putting a shift in and still being slow was more prone to making mistakes.

“The frustration when Kalle is opening the road,” Latvala told DirtFish, “it’s also something that might make you a little bit more phlegmatic, that you might lose a little bit more because you don’t have the speed when you realize that I’m losing it; then you don’t get the best out of yourself.”

None of the Toyota quartet could get the best out of the car either. Their pre-event test had been a nightmare: both Lappi and Takamoto Katsuta had binned it on their respective days and Elfyn Evans’ turn bore little use for honing a setup for the hot and dry conditions in Greece – it rained. Only Rovanperä got a full day’s worth of testing in.

In Latvala’s mind, that awkward lead-in to the rally was a primary source of Toyota’s woe.

“Basically where it’s coming from is that we had a very difficult test,” he said. “Why is because two of our drivers went off, so we lost two days. One day was raining and then basically there was only one day which was for Kalle to do preparation for the rally.

“And one day wasn’t enough to necessarily do the best setup for the rally. That’s why I think the comments are coming from the drivers.”

Setups proved a nightmare for the Toyotas. The Yarises simply lacked traction and no amount of mid-rally tinkering would alleviate the problem. 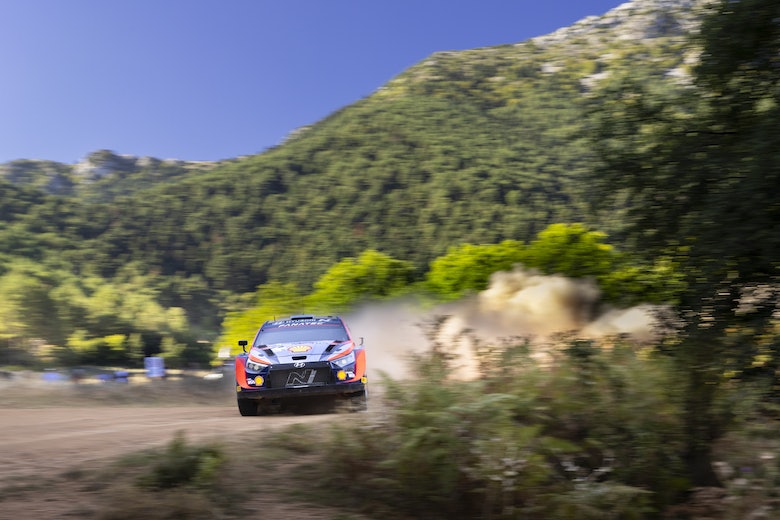 Katsuta, who of all the Toyota drivers looked by far the most lost on Friday, tried anyway. Instead of helping, it made the problems even worse.

“We changed a few things – actually, many things – last night and unfortunately it went the wrong way along, so struggling more than yesterday,” he said after Saturday’s morning loop.

“We changed many things so it’s hard to say what the main problem was. But for me I wasn’t able to drive like normal; big understeer, big oversteer. Very difficult, to be honest.”

Despite the woe, Katsuta kept up his 100% points-scoring record for this season with sixth place – a consequence of not hitting or breaking anything, despite several spins. But at no point all year had he ever felt so lost driving the Yaris. He was slower than Rally2 cars on pace alone at one point – and was struggling to understand why.

“Most of the time I’d don’t feel so bad feeling from the car,” Katsuta explained. “Every time that the car is working well, nothing changes too much. Even I felt, ah, something is wrong, but time is good. But this time I felt like I couldn’t find any rhythm and feeling.”

Latvala is not reaching for the panic button, though. After all, there are no more rough, twisty gravel rounds left in 2022.

“We know in sport every now and then the moment comes for the bad sector, and unfortunately these bad rallies are coming together, after each other,” he concluded. “I mean I’m not surprised that these things happen but unfortunately they are next to each other.”

And on that front, there is unity. Sporting director Kaj Lindström agreed with his Toyota colleague.

“I think it’s something that happens to all the teams at some point,” he said. “We’ve been at quite optimum performance at all the events and there’s some ups and downs. We were not at the optimum here and it’s just part of the game.”

Toyota’s drivers were all cagey as to what exactly had gone wrong. Rovanperä’s coy explanation was that “the car is different,” though wouldn’t elaborate beyond saying he was lacking grip.

But Latvala did hint at the root cause. Perhaps all of that early-season winning had allowed complacency to set in. Toyota had stopped swinging for the fences.

“We have had really good success this year overall, we have been on the podium every rally except Sardinia until now.

“And I think just when it goes well, you build up certain confidence but sometimes you might forget to think outside the box; I think that’s what happened.”