A round of the World Rally Championship at Monza? No, thanks. Watching the cars dodge the cones and concrete on the first full day of Monza Rally action, I was convinced. This was a farce.

As a way of deciding who should stand on top of our world, this travesty was making a mockery of everything rallying stands for.

I was wrong. On a number of levels.

I will admit, I’m still wrestling with the decision to take a major sporting event to an area so massively impacted by COVID-19, but what was WRC Promoter to do? It’s the promoter’s job to promote rallies and, if the regional government and local authorities of Lombardy were willing to welcome the WRC, we had to go.

But go to what? Talking to Carlos Sainz shortly before the start of the rally, the two-time world champion asked for more detail about the event.

“It’s not going to be like the Monza Rally Show?” he asked, “Because that’s not rallying.”

A tin-top-style apex arm wrestle might entertain the masses at what’s become rallying’s traditional end of season bash, but Sainz is right: it’s not really what the WRC is about.

What we ended up with was a world championship single-venue event sandwiching some superb mountain roads. If the weather could sprinkle some of its magic dust on that, maybe it would work. 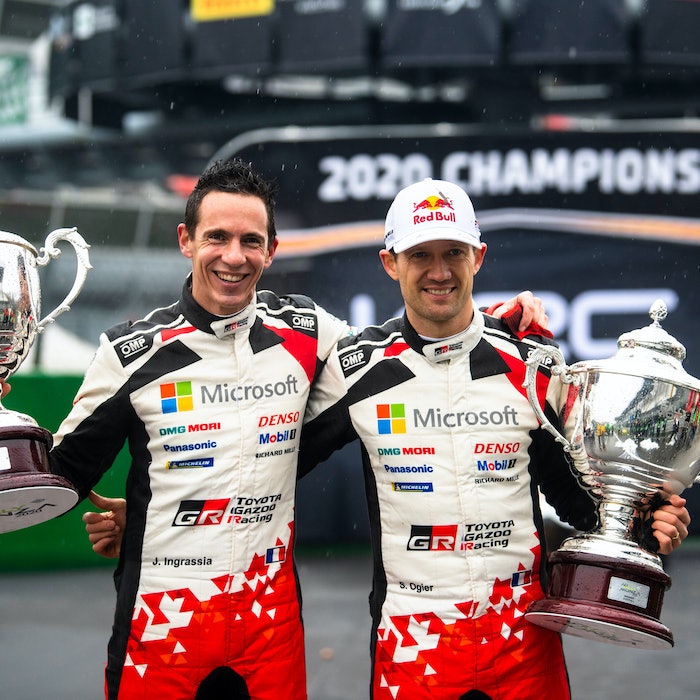 While team-mate and title rival Elfyn Evans retired, Sébastien Ogier weathered the storm to take the title by eight points

What we actually ended up with was one of the most complicated and testing rounds of the WRC ever.

Following the recce, some were still to be convinced. Outgoing world champion Ott Tänak reasoned rallying was about flying between the trees, not trying to thread the eye of a high-speed needle as he looked to slot his 1875mm-wide Hyundai between gates seemingly spaced at 1877mm…

Let’s be honest, Friday was ever so slightly insane. The weather went bonkers, full wet tires went out the window and winters were shipped to the cars’ four corners as grip across grass, gravel and deep mud was sought.

Come on, you can’t deny you’ve never wondered what might happen if the World Rally Championship was crossed with a bale-dodging weekend club rally, complete with split junctions and cars going in all directions.

Last Friday and Sunday was just that event. That said, I have nothing but absolute admiration for the organizer. Automobile Club d’Italia – Italy’s governing body – has put on two out of seven rounds of this year’s World Rally Championship. And done so in next-to-no-time. And done it very, very well.

Undoubtedly, there were aspects of last week that were far from ideal for the world championship. But ultimately the crews were told to go from A to B as fast as they possibly could. And the one who did it fastest would be the winner. Regardless of how many surface changes are planned, how many junctions are created and how many chicanes put in your way, rallying remains a discipline of startling simplicity.

And the stages around the track put everything at an absolute premium. Without the kind of long- and medium-speed corners where a driver’s comfort and confidence in the car-aero-tire-grip combination can shine through, it was down to who could be the most ballsy on the brakes and find the most feel on the way out of the corners. Watching the drivers struggling to get them stopped into some horribly slippery junctions was as fascinating as the balancing act to lay down 400bhp on a Teflon-topped track.

And then, every now and then, with a bit more space, a driver would offer the thing the beans, treating us to a glorious four-wheeled drift. There was plenty worth watching at Monza last week.

The Monza Rally was one of the more contentious WRC events, but round seven also offered the opportunity for history to be written as well as a chapter or two on a very worthy champion.

Bringing a human element to a story brings it to life, adds color to the picture.

In a year that has delivered some abiding moments of humanity at its very best, the image of Elfyn Evans standing at the side of the road slowing Sébastien Ogier down is fitting.

Had Evans not been there, it’s entirely plausible – probable, in fact – that the sister Yaris WRC would have landed on top of the sorry-looking Toyota, which sat nose up at the bottom of a bank.

Such a move would have secured the Briton his first world championship.

It speaks volumes about Evans as a person that it didn’t even enter his head. His first thought was to avoid a fellow competitor enduing his miserable fate.

“I had a feeling to go very slow as well and I was actually not far from losing it as well so it was an incredible, incredible grip change,” Ogier told DirtFish, describing the moment he encountered Evans.

“Honestly it could have happened to anybody there so they were definitely very fair, like I was hoping from them, in slowing us down as a team-mate. I think we would all do that; well maybe not everybody, so it’s great that they’ve done it.”

Evans deserved to be World Rally Champion this year. But, as a British writer, let’s lose the emotion and the flag-waving and remember Ogier was just as worthy a winner.

More so from a competitive aspect. He had more fastest times, more time in top spot, he fell foul of a dodgy magnet in the transmission (not to mention a defunct number one cylinder) in Turkey and won in Monza.

I was determined not to make this a season review, but it’s worth inspecting the wider context of the season while congratulating and commiserating.

Ogier drove a superb event in Monza. He drove the drive of a champion, which is why six had become seven, with the potential for eight. And if there’s eight, could there be nine – to match the record of his countryman Sébastien Loeb?

We’ll consider the question of Ogier’s future a bit more in the week ahead, but for now, let Ogier rejoice in his success. And Evans remember what he did this year and the position he’s in for next year.

While the Monza Rally delivered title-turning drama, what it didn’t really do is fire a fascinating competition.

Once Thierry Neuville’s Hyundai retired on Friday, both Tänak and Dani Sordo were reminded, regularly and often, that their presence on the podium would be very much appreciated. They delivered, with the 2019 champion just edging Sordo for second on the powerstage.

It would have been nice to have seen those boys racing through the weekend, especially given Sardinia winner Sordo’s speed on day one and the potential for one of Hyundai’s part-timers to deliver back-to-back wins. Dani Sordo winning 66% of the WRC rounds he has started this season would have been entirely in-keeping with a strange, strange year. But it wasn’t to be. Instead, he has to be content with a podium on 66% (two out of three) starts in the 2020 world championship.

It missed the ultimate competition, but in terms of drama, emotion and action, the Monza Rally delivered

Ahead of the event, he and team-mate Teemu Suninen talked about the changeable conditions opening a window of opportunity. No, they hadn’t tested for this event… but nobody had tested for these conditions.

Suninen’s hopes of making the most of a level playing field went south with an early engine failure and a win for his fellow Finn would have given Lappi’s 2021 conversation with M-Sport team principal Malcolm Wilson a very different look in the coming week. But it wasn’t to be. Outside the confines of the circuit, he struggled to cling to the tails of those ahead and fourth was as good as it would get.

Lappi’s countryman Kalle Rovanperä ended his rookie season in rallying’s top flight on a slightly lower note than he’s managed all year. The 20-year-old Toyota driver clinched his fourth fifth-place finish of his maiden Yaris WRC campaign, but his lack of experience was exposed on this event.

We can’t leave this page without mentioning a few others. Takamoto Katsuta went from zero to hero, crashing on the first stage and landing his first ever five-pointer and indeed stage win on the last stage.

The Japanese driver needs to focus on the second of those elements as he moves forward into next season. While it’s vital to learn from a torrid second half of the year, he needs to leave it all behind and remember the sensational natural car control he showed at times in some of the most difficult conditions ever.

Were it me, not my colleague Colin Clark, writing DirtFish’s driver ratings, I would undoubtedly have given Taka another point for his emotional response following his team-mate’s departure from the second run through Gerosa.

There’s another colleague of Katsuta’s who might have something to say about that, but we know what he meant…

The others worthy of a mention are Andreas Mikkelsen and Oliver Solberg, sixth and seventh in a pair of Škodas. Mikkelesen showed his class with a sublime run through Friday, while Solberg demonstrated experience and pace beyond his years to deliver a second top 10 overall from the last three WRC rounds of the season.

Ahead of the event, Monza was one of the hottest topics of conversation through this weirdest of years. And the rally itself was no different. Like I said, it missed the ultimate competition, but in terms of drama, emotion and action, it delivered. On every level.

Adamo: Emotion of Hyundai title taken control of me