Should the 2020 World Rallycross season’s entry into the history books have an asterisk next to it? It’s a real toughie.

On the one hand, eight events planned for this season never went ahead. However, thanks to a double-header format and the helpful (and brilliant) addition of Finland to the schedule at the 11th hour, the four events that did take place became eight.

Eight events is a short season, but it’s not so short that it’s crazy. The previous shortest season was only 10 rounds long (2019).

Could two additional rounds have changed the complexion of the 2020 season? The math will tell you it was definitely a possibility, but no matter how much we crossed our fingers for a nail-biting finale, the reality was that this was always going to be Johan Kristoffersson’s title to lose.

The 2017-18 world champion has won half of the rounds in the condensed 2020 season, and emerged from Barcelona – arguably the roughest weekend of the year for him – with a 27 point lead in the championship over Mattias Ekström. That’s three shy of a max score for the weekend. 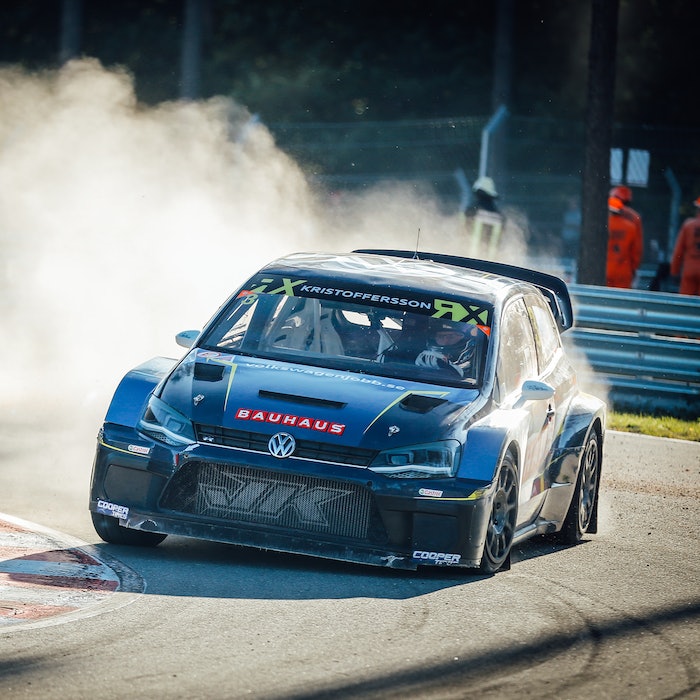 Sources confirmed to DirtFish on Moday that the planned season finale of the 2020 World RX season has been called off.

With Spa-Francorchamps off the menu after its cancelation earlier this month, the Nürburgring event was set to be quietly upgraded to a double-header, much like Barcelona was in the wake of Portugal’s axing.

That would’ve left two rounds for 2016 champion Ekström to try and overhaul his successor. But with a near-full event’s worth of points to his advantage, Kristoffersson already had one hand on the crown.

He’s performed in both the wet and the dry this year, so the snow that many joked about hitting the ‘ring in mid-December was unlikely to stop him too, was it? And in three seasons of campaigning the factory-developed Polo, not only has Kristoffersson never failed to make a final, he’s also never retired – so there goes any kind of potential reliability concerns too.

All the early ending to the 2020 season has done is rob us of a chance to see cars on track once again – granted, something that in this year of lockdowns and cancellations would’ve been very welcome indeed.

It’s safe to say that the championship was looking more and more likely to go in Kristoffersson’s favor anyway.

That doesn’t for a second mean that the 2020 season has been a short, sharp waste of time. No. While the endgame may be very clearly in Kristoffersson’s favor, it hasn’t always been the case. In fact, it wasn’t until Barcelona – the first weekend where Ekström failed to finish on the podium – that Kristoffersson began to truly pull away in the points.

Until then we’d been treated to one of the best title fights in World RX history. A returning force in his once dominant, mothballed ex-factory machine, versus another strong champion of yesteryear making a full-season comeback that wasn’t even on the cards until late on.

Between them, the duo finished one-two three times, and first and third another. Ultimately it was Kristoffersson’s consistency and stronger podium record – seven to Ekström’s five – that gave him the edge. It wasn’t the epic three-way finale decider we had last year, but it was still a battle that kept us engaged over the course of what has been a rather bizarre season.

Just because he didn’t get the chance to finish the job on track, it doesn’t make Kristoffersson’s record-breaking third World RX title any less of an achievement than his previous two either. He earned it fair and square, and while it may have taken less races than in 2017 and 2018, ultimately he still competed in the same number of events as his rivals.

Of course there’s the (perfectly fair) argument that it’s not a true ‘world’ championship with all of the races taking place in Europe after races in Asia and Africa were canned and previous stops in North America were left out entirely.

But let’s not forget, 2020 has been quite an exceptional year, we’ve been lucky to have any racing at all and are we really going to do away with a season because of a technicality? Elsewhere in the motorsport world, Lewis Hamilton is being hailed as a seven-time F1 world champion, despite the fact that so far all of his 2020 races have been in Europe too, and come the end of the year he wouldn’t have raced on three continents either.

It’s an argument that just doesn’t hold any weight this year. Any other year, sure, but while we battle travel restrictions, quarantines, ‘bubbles’ and more? No.

At this point, a moment should be taken to acknowledge IMG, with its final season promoting the championship now over.

The entertainment giant has been at the helm since its inaugural season in 2014, but confirmed last month that it would be stepping away before its contract had concluded.

While IMG hasn’t always made calls that have thrilled the hardcore rallycross fanbase, there’s no denying the impressive work it’s done over the last seven years, giving rallycross a championship on the same level as Formula 1, the World Rally Championship, and World Endurance Championship for the very first time.

Whoever steps in to fill IMG’s spot certainly has big shoes to fill, not only keeping up what’s been done so far, but building upon it to keep World RX at the forefront of cutting-edge international motorsport.