Citroën works driver Mads Østberg has played down his hopes of victory on his return to rallying on Rally Liepaja, given he has been out of action for six months.

Østberg is one of the most experienced drivers in the Rally Liepaja field, with one win and 18 podiums from 129 World Rally Championship starts over the last 14 years.

Though he’s not registered for European Rally Championship points like his rivals, his background marked him out as a contender for victory in Latvia from the outset.

But Østberg pointed to his lack of recent seat time compared to his rivals, many of whom have already racked up mileage in both private testing and in national and regional rallies over the last month.

When asked if there was a target on his back as victory favorite given his WRC experience, Østberg replied: “It could be of course, but we have to be realistic as well.

“There is a lot of drivers here with experience from the event and also with the championship.

“I haven’t really driven a car in six months, I’ve had one day of testing, and most of the guys here have been driving and testing for about three or four weeks now.

“I’m a bit down at the moment but I’m improving step-by-step, and that’s basically why I’m here.

“I want to build my speed and build my confidence but of course when I start an event, I focus on the times as well.”

Østberg’s lack of preparation was not helped by the late call by the PH Sport team to enter Rally Liepaja, electing to head off to Latvia barely a week before the rally was set to begin.

“The main target is obviously to prepare for Rally Estonia,” he said.

“Everything was decided a bit late, we just knew for about a week before we came here that we were doing the event, so it was just part of our preparation for Estonia.

“But it’s nice to be back in Latvia; I’ve actually been here to compete eight years ago in the national championship.”

Despite its reputation for fast, flat and wide open roads, Østberg is expecting the first day of action on the narrower roads outside of Talsi to be especially beneficial to his Estonia warm-up plans.

“All the stages have a big variation of speed.

“I think that surprised me the most, that I was expecting these fast and wide roads everywhere. 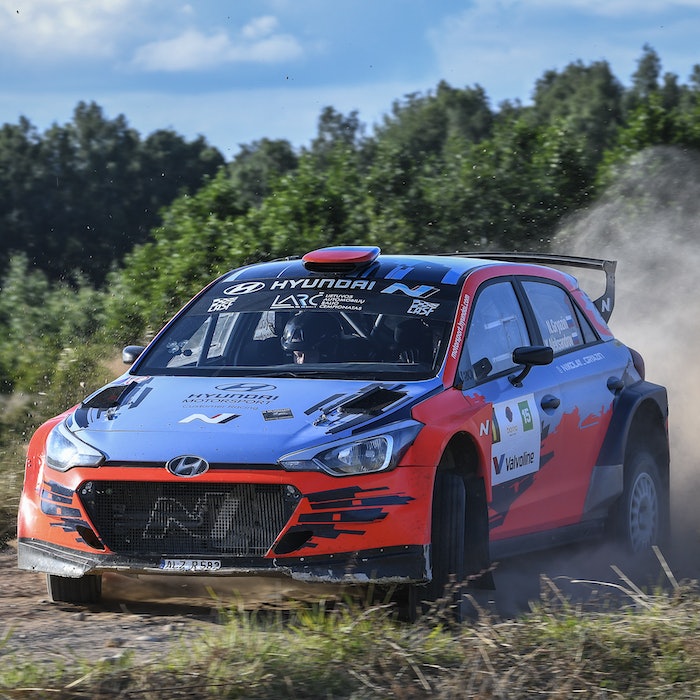 “But it seems like a lot of narrow and more twisty and flowing roads as well, which I’m happy to see because I think we will have more of that in Estonia, so it makes the preparation even better for us.”

While Østberg was only sixth-fastest on Friday’s qualifying stage, Hyundai WRC2 rival Nikolay Gryazin went quickest, but was keen to downplay any suggestion that prior knowledge of the stages made a difference.

Gryazin is based in Latvian capital Riga and has competed on Rally Liepaja five times previously, winning twice.

But rather than knowing the roads, it was experience of the road surface after several years spent in the Latvian championship that was making the difference.

“I can say [I have] a little advantage because I start my career in Latvia, so I understand the surface, but I can’t say I remember all the stages.

“This rally, [the stages are] in opposite direction and for sure we have no advantage [in that respect]. But anyway, we have advantage with knowledge of the surface, it’s most important on this rally.”