Winning the World Rally Championship is a dream for so many, but for others just competing in the series is equally as rewarding.

That’s how 2019 European Rally Champion Chris Ingram must feel this week as he kicks off his WRC3 campaign in WRC3 with a Škoda Fabia Rally2 evo.

Ingram has worked harder than most to get here. Indeed, the majority of his 2019 title-winning campaign was spent searching for that extra cent down the back of the sofa and he even benefited from crowdfunding support from his fans to complete the season and ultimately lift the European title.

Since that success in November 2019 though, Ingram and co-driver Ross Whittock have started just one rally – the Canary Islands Rally – in a Renault Clio Rally5, making Croatia their first four-wheel-drive start in nearly 18 months.

So with so long out of competition but a full program ahead for the next two years in the WRC, what can we expect from the British duo this weekend and indeed across the entire season? And what, if anything, do they need to prove?

We put those very questions to our experts, and here’s what they reckon.

The hard work is only just beginning

If young Chris Ingram thinks the past 18 months or so have been hard work, then he’s very much mistaken. The real hard work starts now, at Rally Croatia.

Everything else that’s gone before this, from his first fledgling steps into international rallying in that pocket rocket of a Twingo to that gloriously bonkers final stage of the 2019 ERC when he was crowned champion has been really nothing more than the warm up for this: the main event.

Maybe calling what Ingram has been through merely a warm-up is a little bit harsh because there is no doubt that what the affable Mancunian has learned, lurching from one funding crisis to the next, will stand him in good stead for the coming most important two years of his career so far.

I like Chris, I’ve known him personally since those days in the Twingo and I’ve always suspected that he has something a bit special about him. But you know what, I’m not sure that necessarily means he’s the quickest of the bunch. That something special is his fortitude, resilience and discipline.

Doubtless, Ingram made the absolute best out of a cash-strapped opportunity. But now the talking has to stop David Evans

It’s been a tough journey to get to this point and every single cent he’s spent in getting here he’s fought tenaciously to raise and that has understandably meant the balls out, gung-ho approach has been off the cards. Disciplined and intelligent drives aren’t always what get folk excited but that has been the necessity of the situation he’s been faced with.

Ingram has a well-honed rally craft. We’ve seen his fortitude many times, his resilience is obvious and his discipline has got him to this point.

Now is the time to see his speed.

Well, maybe not here in Croatia, but most certainly across the two years of this wonderful opportunity that he’s worked so hard to realise.

Ingram needs to lay down a marker

Chris Ingram has been competing in this splendid sport of ours for 12 years now. And this week’s Rally Croatia will be his ninth World Rally Championship start. Surely something has gone wrong somewhere along the way?

For whatever reason, Ingram shunned conventional wisdom, turned his back on domestic rallying, couldn’t afford the WRC’s feeder series and landed himself into the European Rally Championship. For the following five seasons he became a regular in a series which – at best – is a stepping stone. I remain singularly unconvinced of the ERC’s place in rallying, but that’s another story.

Championships, as we’re constantly reminded, favor the mediocre and winning four stages and no rallies in your title-winning season is, for me, the dictionary definition of mediocre. 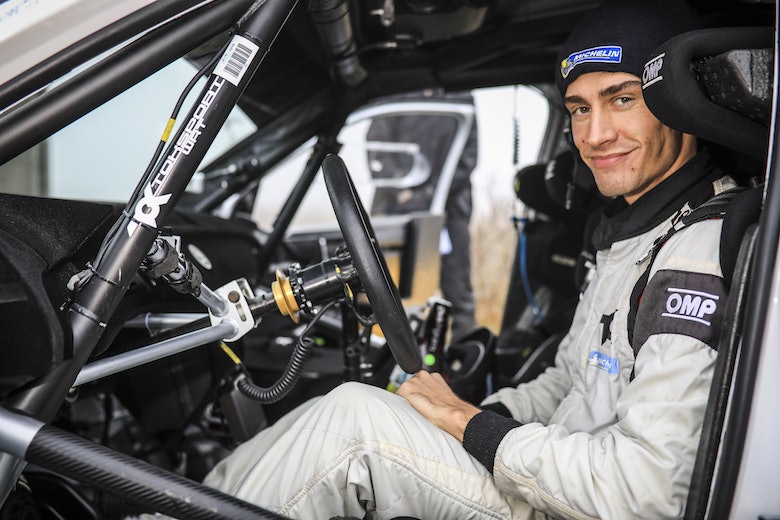 Doubtless, Ingram made the absolute best out of a cash-strapped opportunity.

But now the talking has to stop. Granted, he doesn’t have the same experience of WRC rounds as some of his rivals, but in Croatia this week it’s an entirely level playing field. Ingram must seize this opportunity and lay down a marker.

A WRC3 win would finally silence the doubters.

There’ll be no more question marks

Usually winning the European championship should immediately propel you onto the world stage, but there’s been nothing usual about Chris Ingram’s rallying career to date.

Instead, a full 17 months after winning the ERC title in Hungary, Ingram will begin his first full-time WRC campaign in Croatia.

In many senses, as Colin has already argued, the hard work really starts now but actually for Ingram, this will feel like child’s play.

He has poured every ounce of his being over the last few years into keeping his dream alive and it’s through that dogged determination alone that he’s managed to create this opportunity for himself. Instead of being his own manager and a driver at the same, Ingram can now just focus on the driving aspect and let that do the talking.

There were plenty that questioned the validity of Ingram’s 2019 ERC success given he was rarely the quickest driver out there and in fact never ever won a rally. But you don’t hear the same accusations thrown at Richard Burns for winning the 2001 WRC title when both Colin McRae and Tommi Mäkinen had more raw pace.

Ingram grinded out that title with clipped wings as any accident would’ve been the end of his career, let alone his season. It took a lot out of him too, as he has since revealed the toll that year in particular had on his mental wellbeing.

Now with a proper program in place for the next two years, it’s time for Ingram to show everyone what he is all about. In recent years we’ve only seen him at 75%; now it’s time to see what a maxed-out Ingram looks like.

No more ifs. No more buts. I fully expect him to make the most of it.

Why a September Rally Finland will be just as challenging