The announcement that Kyle Busch will contest round three of the 2021 Nitro Rallycross season in Phoenix is a massive coup for the fledgling series. He will be the biggest name from the world of NASCAR to try his hand at rallycross, but he’s by no means the first.

Here, DirtFish looks at the most notable names that have raced in NASCAR and got behind the wheel of a rallycross car in the States afterwards too.

Without a doubt the most successful convert from stock car racing, Speed will go down as one of the best rallycross drivers of the 21st century, but he had quite the journey to get there.

After a season-and-a-half in Formula 1 with Red Bull’s secondary Toro Rosso team in the 2000s, Speed joined the energy drink brand’s NASCAR operation for the 2008, 2009, and 2010 seasons. From there he spent the next three seasons making sporadic appearances for backmarker teams before making a surprise one-off rallycross appearance at X Games Brazil in 2013.

A winning debut led to a full-season campaign that yielded another victory and fifth in the Global Rallycross standings. From there he was picked up by Volkswagen and Andretti Autosport, where he went on to enjoy an unprecedented run of four US rallycross titles in succession. Nowadays he’s leading the charge for the factory Subaru team.

Steve Arpin was climbing the NASCAR ladder, and doing a fine job too, right at the time rallycross arrived in the States.

Multiple race wins in ARCA and top-10 finishes for JR Motorsports and Turner Scott Motorsports in the second-tier Xfinity series showed that a decent NASCAR career was certainly on the horizon, but rallycross came calling in 2013.

After switching to an M-Sport Ford in 2015, Arpin became a regular threat in GRC and was the only driver to challenge the mightily dominant Volkswagens in the series’ final season.

Having run his own operation for much of his rallycross career, Arpin had to do without the resources of his factory-backed rivals, but that hasn’t stopped him becoming one of US rallycross’s most prominent stars over the last decade.

Nelson Piquet Jr has enjoyed something of a journeyman career since leaving Formula 1 mid-way through the 2009 season, but two disciplines he’s enjoyed lengthy spells in since have been stock cars and rallycross.

The Brazilian made his NASCAR debut in the Truck series in 2010, taking a sixth-place finish at the Daytona season opener. Four more appearances that year yielded two more top-10 finishes, and he then went on to enjoy two full campaigns in 2011 and 2012.

In 2012 he won twice at Michigan and Las Vegas en route to seventh in the championship. He also won once in the Xfinity series, before moving full-time into that category the following year. It was in 2013 that Piquet delved into rallycross for the first time, as part of a gaggle of Brazilian wildcards at X Games Brazil. Driving a less-than-ideal Mitsubishi, results were hard to come by during his first Global Rallycross season – which also included appearances at Loudon, Charlotte, and Las Vegas.

For 2014 he moved to SH Racing Rallycross, headed up by IndyCar team owner James Sullivan. The move turned him into a championship hopeful and a regular challenger for wins – although only one would come, at Washington DC in 2015. With his Formula E commitments ramping up after a title in the electric series’ maiden season, Piquet stepped aside for 2016, but returned for three appearances towards the end of 2016 in place of Jeff Ward at SH Racing.

Two appearances in the TitansRX series in 2019 were Piquet’s most recent rallycross starts.

Kyle Busch’s older brother was the first in the family to get a taste of rallycross, doing so in 2013 at Charlotte Motor Speedway’s dirt track in the Ford Fiesta being raced that year by Speed.

Busch was said to have put in a respectable performance during the test, which took place amid regular event practice, although no times were ever released.

The 2004 Cup series champion has remained interested in rallycross in the years since, appearing at the 2015 season finale as a spectator along with a certain Jenson Button.

AJ Allmendinger tested a rallycross car briefly during the discipline’s early days on US soil.

He was a NASCAR Cup series regular when he attended the 2011 GRC season opener at Irwindale Speedway, where he spent time with Olsbergs MSE and its drivers Marcus Grönholm and Andreas Eriksson – both of whom drove Best Buy-sponsored Fords, much like Allmendinger did at the time.

He had a brief venture out on track with Grönholm in the passenger seat, and even reportedly said at the time that he was looking forward to racing in the series, but the former Champ Car driver has yet to make an appearance in a rallycross race.

A year after Allmendinger, it was the turn of another Ford NASCAR driver to sample rallycross.

Greg Biffle got behind the wheel of Brian Deegan’s Ford Fiesta at Charlottle Motor Speedway ahead of NASCAR’s All-Star race at the venue, turning laps as part of a promotional event.

Deegan took the wheel first to show the 19-time Cup series winner the ropes, before Biffle took over for a handful of turns around the temporary course that featured on that year’s GRC schedule – one of several NASCAR tracks to hold rallycross races at the time.

Now retired from full-time driving, Biffle most recently featured as a ‘ringer’ in the SRX series, Scott Speed also fulfilling the same role.

Now we flip the switch, because Travis Pastrana had already ran in rallycross races before he made his NASCAR debut in 2012.

In fact, his debut in the Xfinity series in an entry with Michael Waltrip Racing was initially set for 2011, but an injury sustained during that year’s X Games put an end to that – but not his rallycross outings, as he contested a race in a Subaru the same weekend he got hurt, finishing fourth with the help of hand controls.

A part-time Xfinity campaign in 2012 resulted in a best finish of 13th, while a full campaign for Roush Fenway Racing in 2013 brought with it improved results. Four top 10s, including two in the first three races, represented a decent return for the action sports icon but he walked away from his stock car career at the end of that season.

He’s made four Truck series appearances since, the best of those being a 16th place in Las Vegas in 2015, but he’s been more focused on rallying and rallycross, adding a fifth and sixth US rally title to his resume while also developing Nitro Rallycross. 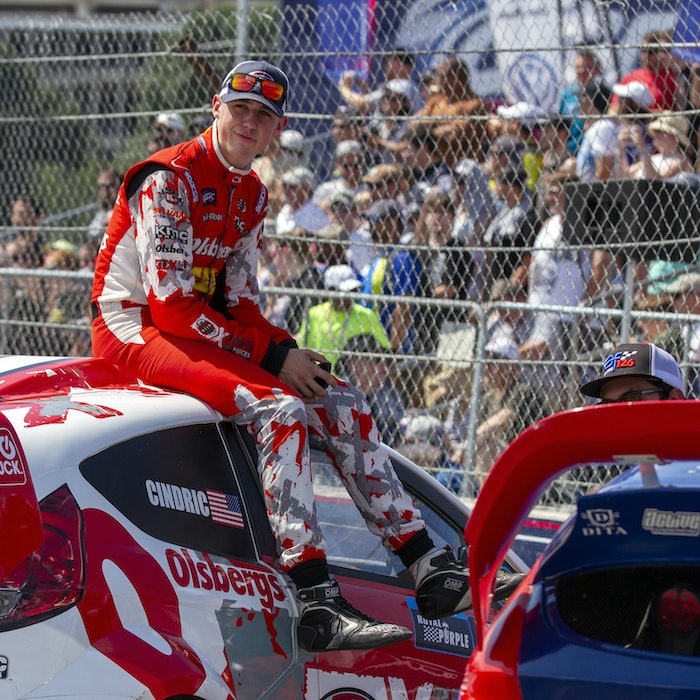 A NASCAR champion's rallycross road to the top

Team Penske protégé Cindric took the unusual step of using rallycross as a stepping stone on his way up the stock car ranks. He also took in two full open-wheel seasons and a smattering of sportscar races along the way.

In 2015 he raced in GRC Lites full-time with the crack Olsbergs squad, running team-mate Oliver Eriksson close for the title. Ultimately he won four races that season, only missing the podium four times from 12 starts.

Opting for partial stock car campaigns in ARCA, the K&N Pro Series East, and the NASCAR Truck series in 2016, he then settled full-time in Trucks for 2017 which resulted in a win at Mosport and third in the standings. He still found time to make two GRC Supercar appearances in Seattle that year.

The back-to-back weekend began in controversial fashion with a collision with title protagonist Speed in a heat race, but in the second round of the weekend he finished a fine fourth on what was his most recent rallycross start.

It’s admittedly a bit of a stretch to include Ekström in this list, but he did race in NASCAR before top-level rallycross, albeit briefly.

Deputising for Brian Vickers, who was out with a blood clot issue, Ekström raced on the Sonoma road course and Richmond oval in 2010, taking a best finish of 21st at the former.

Three years later his rallycross bow came in the US-based GRC series, albeit during its European jaunt.

Competing at X Games Munich, he finished fifth and fourth in the double-header weekend, racing a Marklund Motorsport Volkswagen Polo. Ekström would compete in European Rallycross later that year before making his world championship debut the following season.

By 2016 he was a World Rallycross Champion, but he wouldn’t return to US-sanctioned competition until the very first Nitro RX event in 2018, where he finished second to Timmy Hansen in an ageing Audi S1.

Villeneuve will of course go down in history as one of the few drivers to win an IndyCar title, the Indianapolis 500, and the Formula 1 world championship but, since his F1 career ended in 2006, he has gone on to enjoy something of a journeyman career that’s taken him to both NASCAR and rallycross.

Like Juan Pablo Montoya, Villeneuve attempted a full-time switch to stock cars in 2007, but unlike Montaya he couldn’t make it permanent. He instead made 20 starts across NASCAR’s top three US divisions between 2007 and 2013, plus three starts in Canada’s Pinty’s series between 2009-2013.

In 2014 Villeneuve moved to the World Rallycross Championship, a full-time schedule becoming a limited one after being dropped by his team mid-season.

Four years later he was racing in rallycross again, this time on home soil in Canada as part of the inaugural Americas Rallycross season.

He made his cameo as part of a revolving cast in Subaru’s third entry and was strong on his return, getting faster in every session behind the wheel of a WRX STI that wasn’t as competitive as it is today.

Villeneuve made it through to the semifinals where he ended up retiring, and later said he’d be open to further rallycross outings – though they’re yet to materialize.

Another driver whose NASCAR exploits haven’t exactly been at the forefront of his career, Karam is best known as an IndyCar racer.

But with his open-wheel prospects reduced to part-time campaigns in recent years, he has found a new home in rallycross, competing for Dreyer & Reinbold Racing in the 2019 ARX2 season and this year’s Nitro RX Next category.

In 2019 he did five of the nine ARX2 rounds, claiming four second places and winning the penultimate round at Mid-Ohio despite having no prior rallycross experience. He returned to rallycross’s premier development class this year and after a rough start, took a stellar win at ERX Motor Park, recovering from an early spin that all-but ended his chances of victory, to win as his rivals faltered.

But where does NASCAR fit in? Well, with this year’s Nitro RX season not kicking off until late in the year, and Karam’s only IndyCar start coming in May’s Indy 500 (where he finished seventh), he’s also been exploring the world of stock cars.

So far he’s made three starts in the Xfinity series, at Indianapolis’s road course, Bristol Motor Speedway, and Charlotte’s roval. His best result came at Bristol where he finished 16th. He’s also set to compete in this weekend’s NASCAR Truck series race at Martinsville. 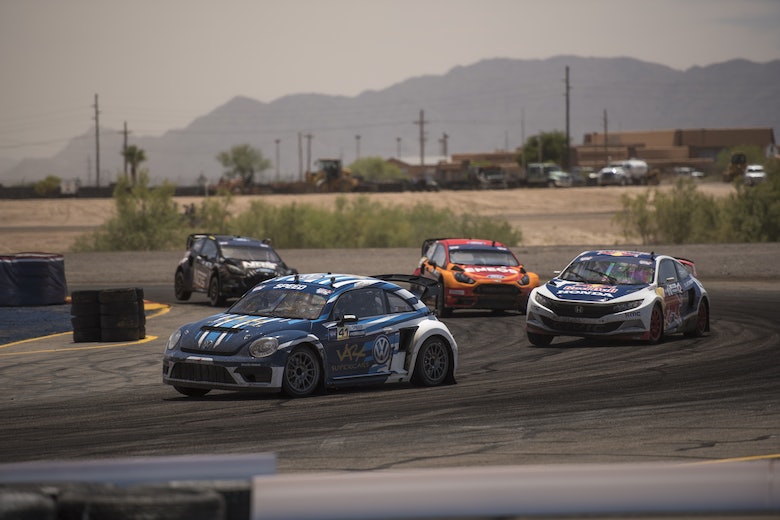 Every US rallycross winner 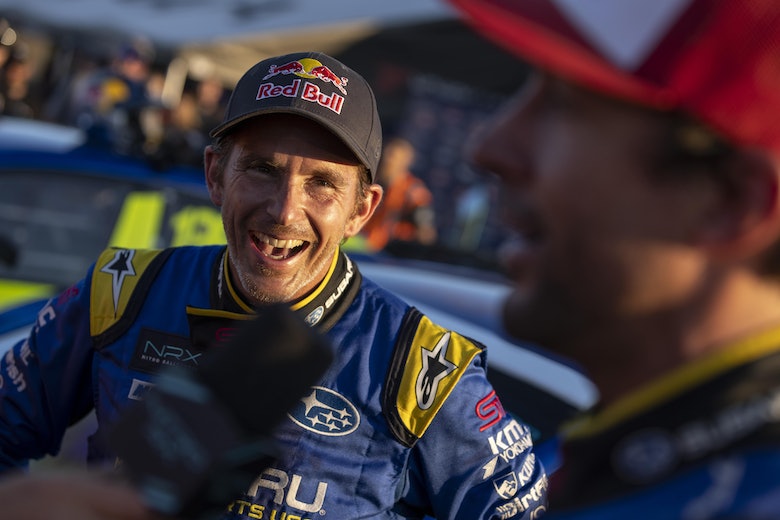 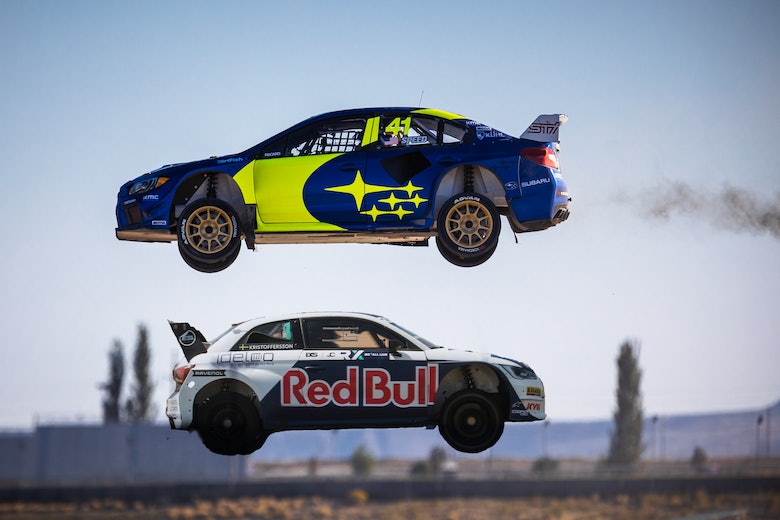 World RX vs Nitro RX: Is it fair to compare?