Elfyn Evans has won Rally Finland for the first time in his career, beating Hyundai’s Ott Tänak and Craig Breen to a victory that keeps his World Rally Championship hopes alive.

Evans trailed points leader Sébastien Ogier by 44 points heading into Finland but with Ogier restricted to just fifth place, Evans stole a vital 20 points back from his Toyota team-mate with victory and the fastest powerstage time to sit 24 points behind Ogier with two rounds of the series remaining.

Thierry Neuville and home favorite Kalle Rovanperä have both been eliminated from the equation now as neither driver managed to score any points in Finland.

Evans, who eventually secured his second victory of 2021 by 14.1 seconds, was part of a leading group of five drivers across the first day. 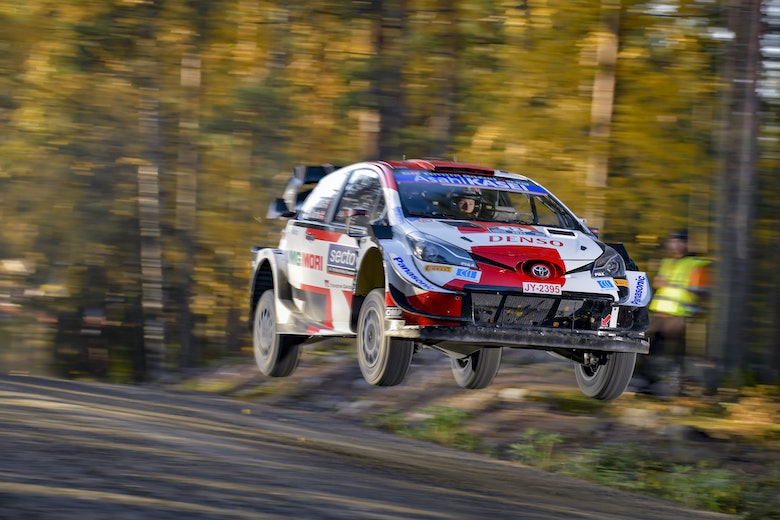 However it was the Hyundais of Ott Tänak and Breen that were setting the pace, trading the lead on a rally the team had never scored a podium on before let alone won.

Breen led overnight for the first time in his career, but just 7.9s split the leading group – which also included WRC returnee Esapekka Lappi and Rovanperä.

Rovanperä had been expected to set the pace but wasn’t totally happy with the behavior and set-up of his Toyota. That all became a moot point on the final stage of Saturday morning where the 21-year-old got crossed up, jinked to the opposite side of the road having attempted to correct a big slide and careered into a pile of sand that had been left to protect a telegraph pole.

He would return on Sunday but with a pain in his back persisting, he opted not to push hard in order not to aggravate it and he therefore left his first home WRC event in a top-line car empty handed.

Saturday was all about Evans. As Lappi began to slip backwards, Evans put the hammer down and had the rally lead after just two stages of the day. He had found something on his pre-event test and utilized it superbly.

Breen was soon swallowed by his team-mate Tänak too, as the 2019 champion went on a charge of his own across the afternoon, threatening to mirror Evans in winning all of the loop’s stages until Evans responded.

The battle remained close with just 9.1s separating them heading into the final day, but Evans proved too strong for Tänak who had to settle for second. Although with Breen also in third, this was by far the most encouraging Rally Finland Hyundai has ever had.

“It’s been great fun and I think the most difficult was with Hyundai we had no pace coming here, so we had to try hard first time,” Tänak, who was also second on the powerstage, said.

“We almost made it, so next time coming back with a very different concept we try to do better then.”

Breen, who was second on his last two WRC appearances, added: “It’s a proud moment: three podiums in a row. I can’t believe it to be honest.

“I’d have loved to have gone that extra level and fought for the win, it’s not there yet but it’s so much better than it’s been in the past.”

Lappi’s fourth place had initially been challenged by Neuville, but when the Hyundai driver suffered a water leak in his radiator after a heavy landing over a compression on Saturday’s penultimate stage, Lappi was completely free to drive his own rally.

On his first start in the top class since Monza 2020 and first event in a Toyota for three years, fourth was a result he “had to be pleased” with in what’s likely to be a precursor to a more complete program in 2022.

His powerstage performance was strong too as he claimed the third fastest time.

Ogier was a muted and messy fifth, at a loss to explain his lack of pace on Friday before reverting to a set-up similar to Evans’ on Saturday afternoon, which seemed to remedy most of the seven-time world champion’s discomfort.

He was docked a minute and fined for completing SS12 with a helmet-strap that wasn’t correctly fastened, but as he was already behind Lappi before the penalty and had a healthy advantage over the M-Sport Fords behind, this didn’t affect the results other than to inflate Ogier’s deficit to the winner.

Ogier’s powerstage attack was hampered by a technical issue too, preventing him from grabbing any bonus points: “The engine just stopped and power is also not there,” Ogier explained.

“It was not the best one [rally], it’s part of the game,” he added on his weekend performance. “I’m really looking forward to some asphalt now, some real racing and not this road cleaning s***.” 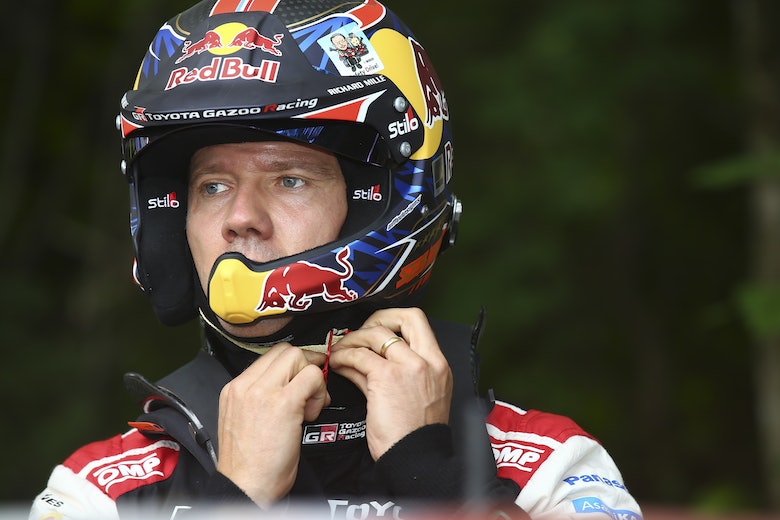 Ogier gets fine and penalty for repeat helmet-strap breach

Without a pre-event test and having struggled on fast rallies of late, M-Sport’s Gus Greensmith and Adrien Fourmaux weren’t expected to shine and so it proved; the pair not able to match the pace of the works Hyundais and Toyotas.

Greensmith scored sixth place on what was a trouble-free event for the Briton, finishing over a minute clear of Fourmaux who was competing with co-driver Alexandre Coria for the first time.

Fourmaux did at least get the unofficial honor of jumping the furthest on the artificial crest that concluded the rally, leaping an incredible 68 meters in his Ford Fiesta WRC.

Takamoto Katsuta was another to use a new co-driver in Finland, partnering with Oliver Solberg’s former navigator Aaron Johnston.

The pair had an eventful event; winning the first stage of the rally in the streets of Harju to grab an unexpected early lead before surviving a massive, high-speed spin on the first forest test.

That moment knocked Katsuta’s confidence a touch but worse was to follow on Saturday when he ran a bit too wide over a crest, clouting the rear-right of his Toyota against a rock and which threw him off the road.

While Katsuta’s Yaris spun and came to rest close to the stage, the damage caused by the impact was too great for him to drag himself free and he was forced to retire, returning on Sunday to bag some useful experience.

“The feeling is really good now, we did big changes for this rally – changed the team, changed the car – but still it’s nice to be in a good, proper team who is working well and giving everything to make good results,” he said, seemingly throwing shade at his old employer.

Second was damaging for Østberg, who could’ve drawn level with the absent Andreas Mikkelsen in the championship had he won both the rally and the powerstage, but instead he trails his Norwegian rival with just one round remaining.

Østberg will contest Rally Spain in two weeks while it’s understood Mikkelsen will conclude his season on the Monza Rally in November.

Jari Huttunen, who crashed on his pre-event test on Monday, was a slightly despondent third for Hyundai but damaged his radiator over the man-made jump at the end of the final stage. But his weekend was still a lot smoother than his team-mate Solberg’s.

Solberg, another to have a new co-driver in Craig Drew, was fourth in class behind Nikolay Gryazin – who retired on Saturday with two punctures and just one spare wheel – before crashing out early on Saturday morning.

Emil Lindholm scooped WRC3 honors in Finland, a week after finally securing the Finnish national title that has eluded him for years.

His Škoda Fabia Rally2 evo was 10th overall to boot.

Evans on brink of Finland victory after another stage win