With every passing rally, the new hybrid-era landscape is shifting rapidly. This is what we learned from the fifth round of the season:

Hyundai can still save its season

A win and a third place for Hyundai was unlikely to be on anyone’s betting slip for Sardinia, given its start to the season and that it had barely scraped one car onto the podium in Portugal.

It was, in some sense, a fluke – Toyota’s pair of drivers best-placed in the road order to muck into the victory fight, Elfyn Evans and Esapekka Lappi, removed themselves from the equation, which left Tänak free to push on as M-Sport’s Craig Breen made do without hybrid power at times. Plus the rally winner might have fallen further back had Friday’s last two stages not been canceled, as he felt slowed by a transmission issue that he’d have potentially needed to carry into subsequent stages.

This was a stroke of good fortune – something Hyundai’s not had much of lately. What’s clear now is that when it gets the rub of the green, it has a set of drivers who can convert a golden opportunity into a golden result. 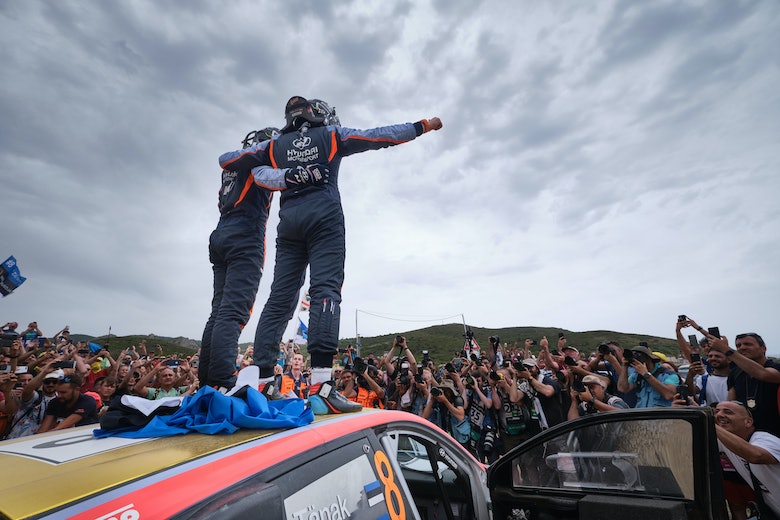 Kalle Rovanperä may have bolted far into the distance in the drivers’ title race already but ask Hyundai which one its big bosses in Korea wants and – at least during the Andrea Adamo era – it’s always been the other one, the manufacturers’ title, that it really wants.

And in that battle, the gap is much, much smaller. 41 points. For a sense of perspective, Toyota scored 520 last year.

41 is no daunting gap. If it can keep racking up double podiums from this point on, they’re in business.

Rovanperä still has a weakness

Forget Rovanperä’s pace on Friday. We all knew it was going to be a tougher ask to stay near the sharp end of the leaderboard as road sweeper in Italy than Portugal. But there were some chinks in his armor showing in Sardinia.

There was the mishap on Friday. The gravel sweeping stuff was unavoidable but ripping the rear wing off very much was avoidable. That cost him even more time as it disrupted the handling of his GR Yaris greatly.

It was a useful reminder that, yes, even after scoring an improbable three wins a row, he too is still human. He can make mistakes and leave a window open for others to take advantage.

A second problem emerged – he and the Yaris are not in perfect harmony. He struggled to coax it into doing what he wanted on the slower, more technical bits of stage. Tempio Pausiana was a stark example – it was the narrowest and most technical test of the lot and he was only ninth-fastest, slower than Teemu Suninen’s Rally2 car.

It’s nothing that on its own can stop him from winning the world championship. But it’s a weak point his rivals can try and exploit. Will they make the most of it on the Safari Rally?

Toyota isn’t invincible after all

There had been zero mechanically-induced retirements for Toyota heading to Portugal. Its new Rally1 challenger was running like clockwork and, Elfyn Evans aside, so too were its drivers. To the point that its B-team driver Takamoto Katsuta arrived third in the championship, such has been his consistency so far.

Watching a Yaris parked up at the side of the road with a holed cooling system from an underside impact was a new sight. Yet after it ended Evans’ rally it nearly wiped Katsuta out too.

And then there was Lappi. In the perfect road position, with what’s widely seen as the best car right now, he had the lead then lost it. He’s probably right to say that there wasn’t a whole lot he could do about it – you can’t plan for something that you can’t predict is going to be there.

But for once, there was no Toyota left in the queue to step up and move into position. For three straight years, there had always been a Yaris on hand to swoop in and bag a podium. Bad days were never that bad.

Finally, they had an absolute shocker. Not necessarily because they’d done anything wrong – it was just its, perhaps even belated, turn to suffer a huge dose of rubbish luck.

Loubet really is better than the i20 made him seem

Before Sardinia there were signs that Pierre-Louis Loubet might be finding his mojo again. There were solid stage times, albeit punctuated by several minor driving errors, on the gravel of Portugal.

A year ago and his career looked to be in terminal decline. Something resembling a positive result was hard to come by in his customer Hyundai. Then late in the year he got hit by a car in Paris. It sounds like a year that would break most.

Yet he is still here. Still standing. And after Italy, probably standing a little taller. He kept more experienced team-mate Breen honest for much of the rally. And he outperformed Adrien Fourmaux throughout.

When Loubet told us the Hyundai he was driving simply wasn’t allowing him to thrive, it would be easy to dismiss it as making excuses. A bad workman blames his tools, so the saying goes.

Except given a brand new tool, the Ford Puma, he looks like a different driver. Faster, more consistent.

If he can continue moving through his development curve the way it’s started, it will be very hard to justify not selecting him for manufacturers’ points-scoring duty.

Spare a thought for the guys right at the back of the road order. They had every right to be hacked off last weekend.

Rally Italy was scheduled to have 21 stages. The leading crews got 19 thanks to cancellations on Friday afternoon.

But several drivers didn’t get 19. They got less. Way less.

Take, for example, Jan Černý and Zoltán László. On Friday afternoon, they strapped themselves into their Ford Fiesta Rally3s and set off for two passes of Osilo-Tergu and Sedini-Castelsardo apiece.

What they got instead was six hours driving around in circles and waiting for stages that didn’t happen. Time and time again, stages were stopped for stoppages further up the road. Sometimes it was crashed cars blocking the road but there was also a radio communications problem to blame in one case.

Three more notional times were handed out for the WRC3 crews on Saturday. And it was even worse for the Rally4 crews that showed up – they lost an extra stage on top.

Junior WRC skipping Sardinia in its calendar was a smart call. They’d have done two-thirds of a rally rather than the whole thing.

Will the crews that did show up get a 33% refund? Unlikely.